How Did Kyle Rittenhouse Have an AR-15 at 17 Years Old?

Tracking the Suspect in the Fatal Kenosha Shootings

Does Kyle Rittenhouse Have a Self-Defense Claim?

Although not absolutely clear yet it seems that kyle was attending a mass rally and has been accused of being a vigilante.

“In an interview with the Daily Caller that night, Rittenhouse refers to his presence as his “job” and explains his self-appointed responsibilities in police-like vernacular.

“People are getting injured and our job is to protect this business,” Rittenhouse says in the 19-second clip. “And part of my job also is to protect people. If someone is hurt, I’m running into harm’s way. That’s why I have my rifle; I’ve gotta protect myself obviously. But I also have my med kit.”

In another video clip, officers in an armored vehicle toss bottles of water to Rittenhouse and other armed civilians. Though the people are clearly violating the city’s 8 p.m. curfew and Rittenhouse is too young to openly carry a firearm in Wisconsin, the officer expresses his gratitude for the group.” read more

You can see many pictures with his face not hidden on multiple sites………….. Like this one 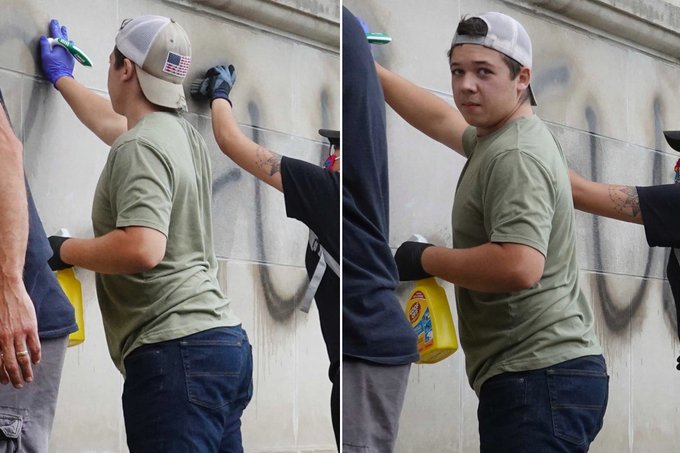 Which does not seem your typical Vigilante!

I counted at least 12 guys chasing him and he is trying to run away.

I saw him get hit by a skateboard

I saw him get stomped on with both feet

A perfect stand your ground defense that will not be questioned by any jury. He will walk free! And so he should!

Kyle Rittenhouse Worked As Lifeguard In Kenosha On Day Of Shooting, Cleaned Graffiti Off Local School After Work: see more